After speeding through the California State Assembly Housing and Local Government committees on January 12, Assembly Bill 672 – to provide State Taxpayer funds for cities to convert their public golf courses to housing developments – aka "The Public Golf Endangerment Act" officially died on January 31, after the financial watchdog Assembly Appropriations Committee on January 20 put a “hold in committee” on the fiscally and legally uncertain bill. 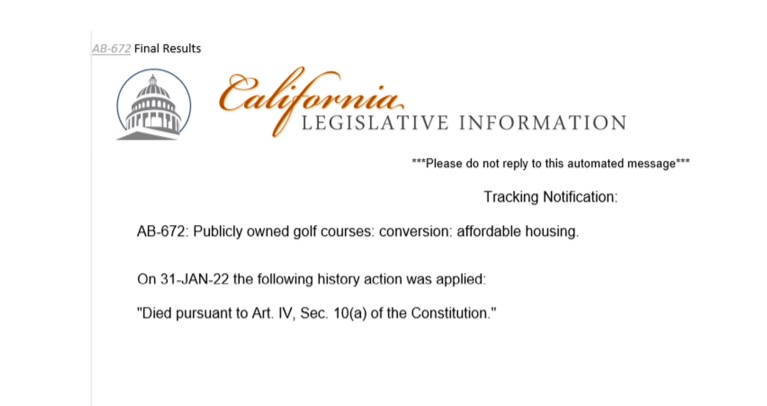 "A legislative initiative that would have enabled municipally owned golf courses in California to be plowed under for redevelopment into housing has stalled in committee. The battle over the bill that could threaten 177 of the state’s golf courses is not over, however. Supporters and opponents expect a revival of the bill in one form or another in the California State Legislature in the near future...

Concern about the bill included the vague language of the proposal, providing no clear threshold for what counts as “affordable housing,” nor for “low income.” Moreover, claims about the value of municipal golf courses to the community have focused narrowly on whether they are self-sustaining or a drain on public revenues and exclude entirely their value as environmental greenspaces, habitats and ambient cooling zones for densely built up urban areas where open space is at a premium. Nor have supporters considered the value of public access to golf as recreation accessible to minorities, women and youth that these courses provide. There has been strenuous opposition to the bill by public golf groups representing minority, youth and female golfers who disputed the bill’s underlying assumption that golf ground was being misused...

The idea, for example, of plowing up open space for paved-over hardscape housing makes little sense in the face of so much other, already paved-over areas (shopping malls, parking lots, office buildings) that are moribund and could much more readily be converted to affordable housing. Meanwhile, the constructive role that golf courses play in storm water management, providing tree coverage and much-needed urban space enclaves for flora, fauna and pollinators needs to be made known more widely."

"AB672 still has a way to go to make it into law, with a winding path through various committees before it could even get to the governor’s desk. But most golfers understand the perils of complacency. You post a few good scores, reel off a few straight birdies—just when you think you’ve got a handle on the game, the fates conspire to knock you down.What’s true on the course applies in the political arena, too... Since so much of politics is perception, the battle around AB672 will hinge in part on the game’s ability to present a fuller picture of itself...

Nate Jackson is 81, and like most Black golfers of his generation, he wasn’t welcomed to the game through the front gates of a country club. His introduction came as a boy at a muni. And munis remain central to his life even now... “Of course, we know that California has a housing problem,” Jackson wrote. “But the state does not have to—and shouldn’t—purport to fix a housing problem with the misguided gesture of closing public courses.” Doing so, he noted, “would be a slap at African American and other ethnic minority golfers and would be a death blow to programs like First Tee and Youth on Course.”

Very disappointed my bill #AB672 was held in Asm Appropriations Committee today. It’s not over yet though! I will try again. pic.twitter.com/BKBKNkOzfq

The many strong objections from golfers in reply to Assemblywoman Garcia's tweet came as no surprise to the Assemblywoman.  She is picking on municipal golf intentionally and strategically.  When she says she will “try again”, believe her, and expect to soon to see a renewed effort.   We’ll be watching.  Thanks, BTW, to those who submitted letters and e-mails to the Legislature objecting to AB672.  Your voice counts.  Your efforts matter.