Winter’s discontent was forgotten, and the 150 golfers who turned-out June 3 to celebrate the San Francisco Public Golf Alliance’s Sixth Annual Alister MacKenzie Tournament to Save Sharp Park enjoyed fog in the morning, bright sun and wind in the afternoon, and Dr. MacKenzie’s beautiful seaside links all day long.
There was much to celebrate. Since the Fifth MacKenzie Tournament in June, 2016, San Francisco’s long-term plan to preserve the historic 18-hole Sharp Park links, while enhancing habitat in the wetlands, obtained final approvals from the Rec & Park and Planning Commissions and San Francisco Board of Supervisors.
On June 3, the golfers responded with record low scores. In the foggy early morning round, a San Francisco First Tee foursome led by mentor/ringer David Chung – a young San Francisco businessman who was runner-up at the US Amateur in 2010 when he was a Stanford junior –posted a gross score of 16-under-par 56. This was two shots better than the 58 posted by a Cal Club team led by former PGA touring pro Roger Tambellini.
Team Fandel Shot 54!
Then, in the sunny, breezy afternoon round, the golf got really serious, as two teams shot gross scores of 18-under-par 54. A team from the Silicon Valley private equity firm Silver Lake, composed of young principals Kyle Paster and Mike Widmann and their friends Tom Logan and Jimmy Cacho, rolled-in 16 birdies, one par, and one eagle. Less conventionally, a Fandel Retail team comprised of Clayton Fandel, Ryan Macaulay, Matt Regnart, and Max Stillman -  all golf team alumni from Pacifica’s Terra Nova High School - had four eagles, including hole-outs from the fairway at Holes 10 and 14 – enroute to their 54.
So did Team Silver Lake!
So of course we had to play it off – with a closest-to-the-pin shootout from the 150 yard marker in the center of the fairway to the 10th green, in front of the clubhouse. The teams hit alternate shots toward the pin from all four team members. The third to shoot for Team Fandel was 25-year-old Max Stillman, a server at Nick’s Restaurant in Pacifica, who in the Fall will attend U.C. Davis to study golf architecture. Earlier in the day, Max had holed his shot from 130 yards on the same 10th  hole. This time, his shot from 150 yards hit the pin and lipped-out of the hole, coming to rest 18 inches away, drawing a shout from the gallery. Silver Lake captain Kyle Paster, the last person to hit, came up 10 feet short of the pin. And that was that. 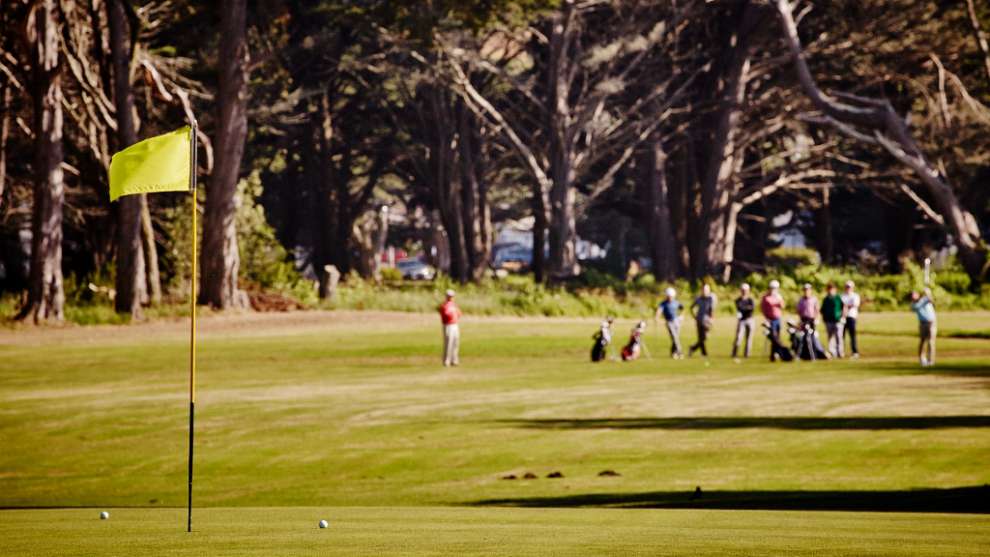 Special thanks to our generous sponsors, donors of our fabulous silent auction prizes, enthusiastic volunteers from our co-hosts, the Sharp Park Men’s and Sharp Park Business Women’s Golf Clubs, and to our other co-hosts, the Alister MacKenzie Foundation, Pacifica Historical Society, Pacifica Chamber of Commerce, the NCGA and Southern California Golf Associations, PGA Tour, Fandel Retail Group, and Bandon Dunes Golf Resort.     Please see the Sponsors Page from our Tournament Program (Below) for a complete list.

Finally, a grateful tip of the hat to: Greens Superintendent Michael Catanzaro and his SF Rec and Park Department greenskeeping crew; Mark Duane, Kevin Ramsey and the rest of the staff at Sharp Park Golf Course; Emmy Moore Minster, Brad Knipstein, Mike Wallach, and Bo Links for sharing their photographs.