It's that time of year. We give thanks for what we have, for the historic public courses and municipal jewels in our City, for our loyal San Francisco Public Golf Alliance members, for those who contribute financial and moral support to our many years-long fight for public golf in San Francisco, and those working with us to preserve Alister MacKenzie’s public golf diamond in the rough at Sharp Park.

And, for those who can, we ask for your contributions to support our efforts, to step up again for the cause, and Donate.

Again in 2021 (as in 2020), our main annual fundraiser, the Alister MacKenzie Tournament to Save Sharp Park, was scratched due to ongoing COVID concerns.  Because our fights for public golf and to preserve Sharp Park require money, we are announcing our second annual year-end fundraising campaign (We expect in 2022 to resume our MacKenzie Tournament – look for a detailed announcement early next year).

In June our members stepped up for a Volunteer day at Sharp Park in coordination with San Francisco Rec and Park personnel: 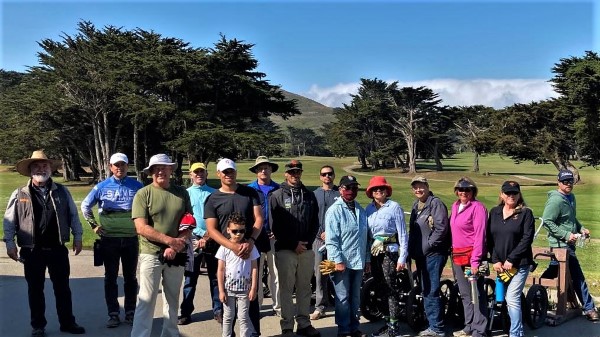 "A 15-person team of Sharp Park golfers celebrated with three hours of volunteer work with the Rec & Park maintenance crew, clearing 20-plus pickup truck loads of accumulated debris from the forest floor between the first, ninth, and tenth holes. Then they shared a picnic behind the 3rd Tee."

Sharp Park continues to be top of mind for national golf writers as the muni most worthy of restoration. 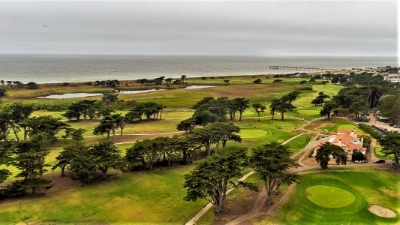 Writing in Golf Digest magazine, Derek Duncan leads off with co-founder Richard Harris at Sharp Park in "The revival of these muny courses is an inspiration for public golf":

"Richard Harris stands on the 16th tee at Sharp Park Golf Course in Pacifica, Calif., and gestures west toward a high embankment, a sea wall that separates the course from the Pacific Ocean. People stroll and jog on it, daubs of color moving in each direction, taking in views of golf holes on one side, the crashing water on the other. Harris is indicating where a proposed green might go, that of a par 3 playing to the base of the sea wall. The hole would be part of a long-imagined recreation of the greens and bunkers architect Alister MacKenzie designed, just before he began work on Augusta National, that have been worn away in the decades since the course opened in 1932..."

Golfwriter Tom Coyne includes a rainy round at Sharp Park in his 50 State, 300 round golf touring opus "A Course Called America":

“The map said Sharp Park would be near the ocean, but I didn’t believe a muni would ever be set so close to the waves; it was, and those waves had reclaimed a handful of MacKenzie’s holes. Twelve of his originals remained . . . As a city course, Sharp Park had no equal when it came to location and holding on to those acres had proved an arduous task—an eight-year legal battle saved the grounds from being closed off as habitat for a garter snake and a rare frog, yet another example of conservationists failing to embrace golf ’s protective capacities. It was a subject Scotsman David McLay Kidd had stamped into my psyche: Lay out some golf holes and fragile terrain is instantly preserved and protected, because it now has purpose, both commercially and recreationally."

Eight miles south (of San Francisco) is the municipal Sharp Park, an Alister MacKenzie design opened in 1932 and badly in need of a renovation of its own. Despite opposition from environmental groups, the work is likely to happen, but even now you can still see the bones of MacKenzie’s layout. Pasatiempo in Santa Cruz is another MacKenzie masterpiece and opened in 1929. Full of magnificent bunkers and amazing green complexes, the course tips out at 6,500 yards but demands all the golf you have. One more Mackenzie creation in the region that you can play is located 75 miles north of San Francisco in the town of Monte Rio. Covering 70 wooded acres, Northwood has nine holes lined with towering redwoods.

Getting to that restoration remains a continuing core project for the San Francisco Public Golf Alliance. Writing in the SCGA magazine FORE, our co-founder Bo Links maps out a path in "The Old College Try - A Path Forward for Muni Golf": 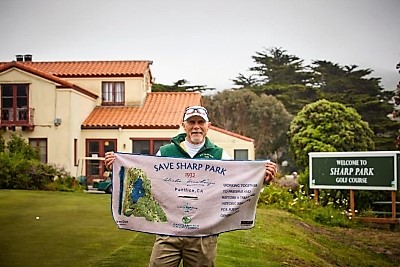 "We need to aggressively reach out to the “golf alumni” to give back — in particular, by asking successful folks who grew up playing muni golf as kids to come to the rescue of the places that gave them a start in the game... That is why we need to call on golfers to support their local munis in the same fashion that college alumni are called upon to support their beloved schools. We need to do this now, for it may well be the only way that the muni courses we love can stave off asphyxiation when local officials turn to other, more pressing financial and recreational needs."

And, while we are at it, don't miss Bo's winning design for the Alister MacKenzie Society 2021 "Ray Haddock" Lido Prize competition for golf hole design that best embodies the spirit and architectural philosophy of Alister MacKenzie:

“My goal was to make a hole that’s exciting and invigorating for every level of player, to find that classic MacKenzie value of ‘pleasurable excitement...The concept of the green was that if the hole is cut up on the championship level, you’re hitting right over the lower level with the chasm in between, and it’s a mini-heroic carry. And even the front-of-the-green hole location, at just over 100 yards, can give the shorter player the same thrill.”  - Bo Links

Note that Alister MacKenzie's career was launched with his winning design for the "ideal two-shot hole" (aka the famous "Lido Hole") and Mackenzie himself pointed to two of his Sharp Park holes as inspired by his "ideal two-shot" design:

“The municipal courses in San Francisco are far superior to most municipal courses. The newest, which we constructed at Sharp Park, has a resemblance to real links land. Some of the holes are most spectacular. Two of them are of similar type to the plan of the ideal two-shot hole. One of them has the island on the right and the other on the left. In designing and constructing the course, we had the greatest assistance from Mr. John McLaren, the designer of Golden Gate Park. John McLaren is an artist, and his help not only in the artistic planting of trees but in creating other delightful features was most valuable.” - Alister MacKenzie

Finally, we've been busy during the pandemic. Over the last two years we:

We have much more work to do, and we need money to do it.

Thank you for your consideration and have a great holiday season!