In Memory of Sandy Tatum

Sandy’s many gifts are reflected in his accomplishments:  1942 NCAA individual golf champion, Rhodes Scholar, partner in the international law firm Cooley LLP, President of the United States Golf Association (1978-80), and father of six.

His passion for golf, the force of his intellect, and his personal charm made him a role model and mentor to many, including 5-time British Open winner Tom Watson, who said of his friend:

“. . . he was priceless... because of both his intellect and the elegant way his mind worked.....  Along with his absolute passion for golf, he was a man of integrity, respect, and humor.”

In his long-time home town of San Francisco, Sandy is best remembered as a champion of public golf – the driving force behind the 2003 renovation of Harding Park, and founder of the First Tee of San Francisco. 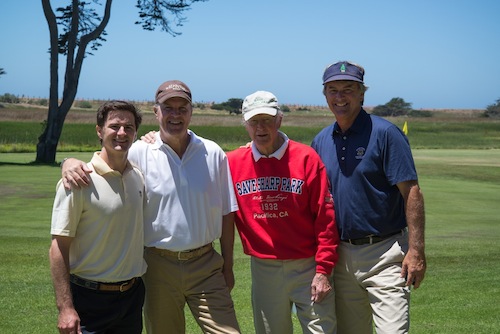 Sandy Tatum on the 18th green at Sharp Park in the 2014 Alister MacKenzie tournament ,with Bryant Williams, Murray Bodine and Jim Williams.
In the last decade of his life, Sandy enlisted in the battle of Sharp Park, where he was a regular at the San Francisco Public Golf Alliance’s annual Alister MacKenzie Tournament to Save Sharp Park.   “They have let it go to seed,” he said of the 85-year-old public seaside links, which he characterized as “a priceless recreational resource which is also an historic treasure.”
In a still-strong voice at age 91, Sandy on December 5, 2011 declared his passion for public golf and love of Sharp Park in public hearing testimony to the City Operations and Neighborhood Services Committee of the San Francisco Board of Supervisors, in opposition to legislation designed to close the golf course, authored by then-Supervisor John Avalos. [Sandy appears at 3:59:45 - 4:02:23 of this LINK]

“My name is Sandy Tatum.  I’m here because I’m so thoroughly concerned about what I think this legislation is heading to do.  And that is to destroy a priceless recreational resource which also is an historic treasure.  You know, . . . considering golf in a political setting, the misrepresentations and misunderstandings about the game are legion -- and they do mislead.  Fact is that golf is not an elitist game.  It’s anything but.  Eighty percent of the golfers in this country are public course golfers.  And more than 90% of the [golf] games that are played . . . in any given year are played on public courses.  So public golf is the heart and soul of the game. . .  [Golf is a] . . . priceless recreational resource [that engages] . . . the physical, [mental, and emotional] aspects of recreation,  . . .  in the context of aesthetic features that make those assets very, very, very effective. . . .  So I would urge that you act so as not to destroy something so absolutely wonderful.”

Sandy Tatum will be remembered by all who play the game, and in particular by the San Francisco public golfers playing the courses he fiercely defended and protected.

"Frank “Sandy” Tatum, who had a profound influence on golf in Northern California and throughout the United States — including spearheading the renovation of Harding Park — died Thursday morning. He was 96... Bo Links, a local golf historian and longtime friend of Mr. Tatum, paid tribute to his influence on the game. “Golf lives and thrives in San Francisco because of Sandy,” Links said Thursday night. “And when golfers pass by Sandy’s Rock behind the first tee at Harding Park, they would do right to stop and say thanks. His work and his memory will live on forever.”

"It all led to the “moment”— when his words calmly flowed with an extraordinary strength—what I later described as a “True Believer in the True Game preaching the gospel of his life.” -  “Playing golf has all kinds of wonderful benefits for people, particularly on a quality golf course,” he said. “And that’s such a vital factor in what we’ve been able to accomplish here. We are giving these people something they can treasure and will matter immeasurably in their lives. Golf is anything but trivial. As the problems in the world become more terrible, this game is more important—on a sociological basis—than it has ever been. It’s a life enhancer and a life extender. There’s no question about that. It has everything that you can add from a game to somebody’s life.” ... When Tatum had to finally stop playing golf two years ago, he continued to pour his energies into personal passions—the successful saving of Sharp Park, serving as a sounding board for today’s golf administrators and helping The First Tee of San Francisco thrive."

Remembering Sandy Tatum, a golf ambassador with an unadulterated love of the game - Michael Bamberger

"Tatum was a first-order clubman, to be sure, but his heart was all over San Francisco's public golf scene. The clubhouse at Harding Park bears his name, for the work he did in overseeing its restoration. His devotion to San Francisco's First Tee program and the kids who came through it was thorough and genuine. Watson will tell you that there were few people on this earth, if any, who had more unadulterated love of the game than Tatum. He enriched the golfing lives of more people than he could possibly know. He took deep pride in the role he played in the golfing life of a San Francisco public golfer named Alexandra Wong, who played her way to Princeton. To Sandy, golf and an education were the great equalizers. "

"In 1997, he spearheaded the effort to renovate Harding Park, the crown jewel of San Francisco’s municipal golf courses. The annual site of the San Francisco City Championship, the course had gone into disrepair, and Tatum came up with a plan to revitalize the layout. With help from other city leaders, Tatum saw his vision come to fruition. The $16 million renovation included a chapter of The First Tee and a nine-hole short course.  Shortly after it reopened for play, Harding Park landed the 2006 WGC-American Express Championship as well as the 2009 Presidents Cup. The Charles Schwab Cup Championship, the season-ending event on the PGA Tour Champions, was played at Harding three times (2010, 2011 and 2013). The course is set to host the 2020 PGA Championship.  “Sure I am going to play Harding,” Tatum told Golf Digest. “What I really look forward to is the first City Championship after all the work. It will again be a premier amateur event. God, I loved playing in ‘The City.’”

“Well played, Mr. Tatum,” a memory of Sandy and the First Tee at McLaren Park

In an e-mail to the the patrons of Gleneagles Golf Club in McLaren Park,  Tom Hsieh, a long-time friend of San Francisco Public Golf Alliance and proprietor of Gleneagles GC, remembers Sandy Tatum’s role in convincing the Gleneagles golfers to foster the young golfers from the First Tee program at the nearby Visitacion Valley Middle School. An excerpt:

"The First Tee of San Francisco was new to The City, shepherded by Sandy Tatum along with his monumental effort to restore Harding Park just years earlier. When word leaked that The First Tee could be coming to Gleneagles, few golfers thought it was a good idea, those who did kept quiet and some were outright against it ... The beer flowed and Sandy Tatum pressed the flesh ... For a rare hour or so the clubhouse at Gleneagles was full of golfers and only one man was speaking:
"You cannot fathom some of the circumstances these young people go home to day in and day out," Mr. Tatum attested to the group of municipal golfers. "Some of these youngsters have none of the basic necessities to help fulfill themselves to their full potential.  Our program can fill that void because the game of golf builds character and has for me ... and I know it has for you.  It is our moral imperative to help save these children through our game. And it will."
Sandy Tatum's words rang with such gravitas and truth that even the most strident opponents to the First Tee melted away into collective head nodding and an eventual wave of applause that filled the room at his conclusion. Today, thousands of children have played golf at Gleneagles and other courses through The First Tee of San Francisco and Visitacion Valley.  No doubt, many lives have been changed and some have been saved.  Just as Mr. Tatum promised.
At the end of the night and on his way out he humbly whispered,  "Well, how did we do?"
You did a fine job, sir.  A damn fine job."

"Golf has lost a great friend. Sandy Tatum was the Abraham Lincoln of the game. The light from his glorious life will shine on fairways near and far for a thousand years. Godspeed to his wonderful family.  So many lives affected. So much good that he did. Truly a man for the ages." 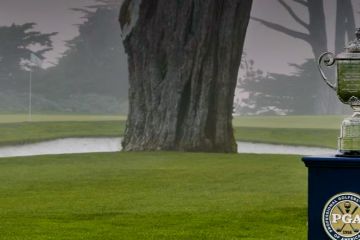 Aug 5, 2020 A Reader’s Companion to the PGA Championship at San Francisco Munis

Jul 26, 2020 The PGA Championship and San Francisco’s Munis - Then and Now View all News & Events