Bo Links, co-founder of the San Francisco Public Golf Alliance, is winner of the 2021 "Ray Haddock" Lido Prize for golf architecture design, awarded by the Alister MacKenzie Society and Golf Digest Magazine, which announced the award in its June 19 issue:

"The winner of the 2021 Ray Haddock Lido Prize is Bo Links. His entry, the reverse C-shaped green, is titled “Sahara.” The front section of the green is a short iron or wedge shot and the back elevated lobe, still just 155 yards—the same as the 12th at Augusta National—is the tournament pin position. The miss to either the lower or upper greens is left or right—long or short is in the sand—while flags along the right side cannot afford to miss left or right. Each hole location offers variety and calls for a different shot, with slopes and bumpers helping to move the ball around the putting surface."

A San Francisco lawyer, Bo is a three-time winner (previously in 2007 and 2008) of the annual design competition for the amateur golf architect who submits a golf hole design that best embodies the spirit and architectural philosophy of Alister MacKenzie – history’s most famous golf architect.

The Alister MacKenzie Society is a fraternity of international golf clubs -- from California to Buenos Aires to Australia to the British Isles -- whose courses were built by MacKenzie during the 1920’s and ‘30s – considered by many the “Golden Age of golf architecture.”  Northern California member clubs include Green Hills in San Bruno, Meadow Club in Fairfax, Claremont in Oakland, Pasatiempo in Santa Cruz, and Cypress Point on the Monterey Peninsula.

In addition to being a noted attorney who has won at the United States Supreme Court, Links is a golf historian, author, and artist who has been a driving force in the San Francisco Public Golf Alliance’s decade-long campaign to restore MacKenzie’s muni golf masterpiece at Sharp Park.  He illustrates and explains his 2021 Lido Prize winning design of a medium-length three-par hole in his entry submission: 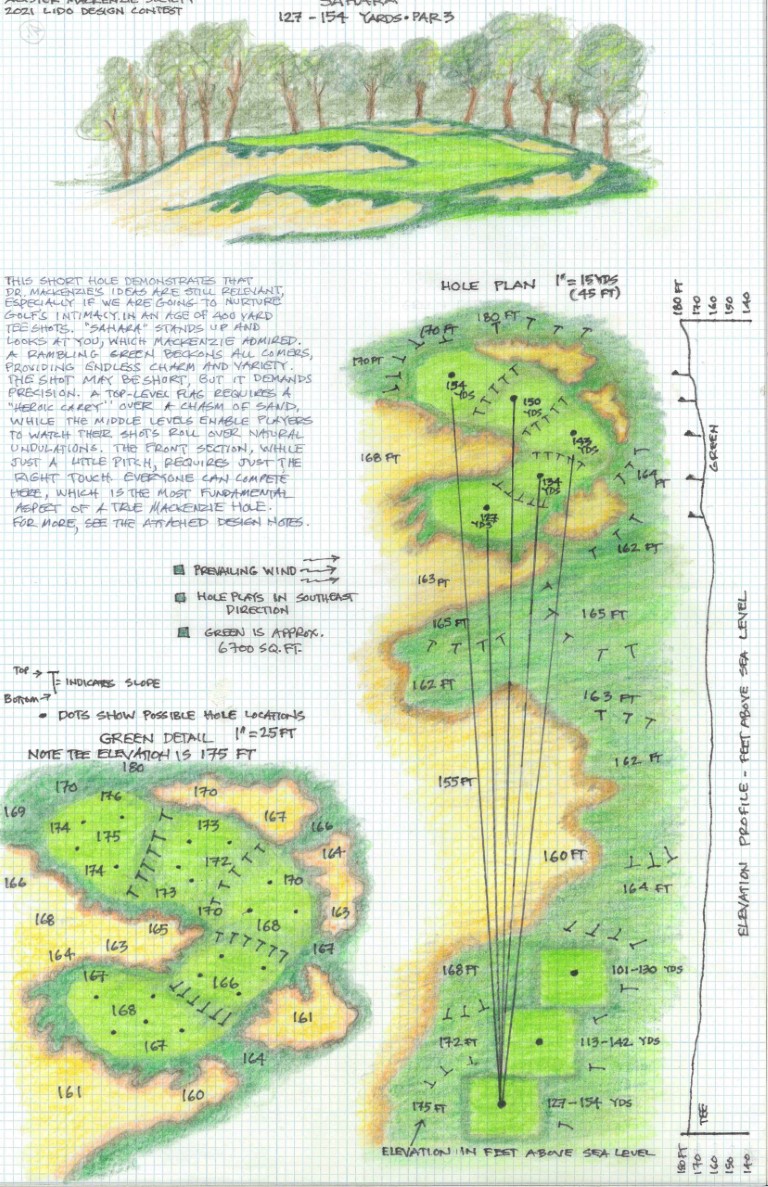 “My goal was to make a hole that’s exciting and invigorating for every level of player, to find that classic MacKenzie value of ‘pleasurable excitement,’ ” says Links, a longtime San Francisco attorney who now lives in Oregon. “It’s not based on any hole I’ve ever seen. The concept of the green was that if the hole is cut up on the championship level, you’re hitting right over the lower level with the chasm in between, and it’s a mini-heroic carry. And even the front-of-the-green hole location, at just over 100 yards, can give the shorter player the same thrill.” - Bo Links