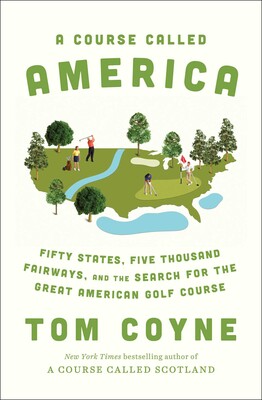 Golfwriter Tom Coyne (“Paper Tiger,” “A Course Called Scotland,” “A Course Called Ireland”) is a one-time suburban Philadelphia high school golfer and caddy who in 2019 took a sabbatical year from his day job as Professor of Creative Writing at St. Joseph’s University to play golf – 300 rounds on 294 courses from Maine to Alaska to Hawaii – and research his new book, “A Course Called America,” set for release May 26, 2021.

The book is not a coffee table anchor with pretty pictures and architectural detail of famous courses.  Rather it is a travelogue of American golf towns and courses, bits of golf history and sociology, Coyne’s road adventures with caddies and golf pals old and new, stories of famous, near famous, and unknown golf pros, architects, and developers, and the Professor’s reflections on all of it.  With the occasional nod to the wisdom of the ages, such as this one from Lao Tzu:  “’A journey of one thousand golf courses begins with a single hole.”

Coyne’s golf odyssey begins traditionally enough on the East Coast, with rounds in the company of stockbrokers at Newport (site of the first U.S. Open in 1895) and the A-list of exclusive old-line clubs on Eastern Long Island, where one day he “felt a tug at my heartstrings. . .  that such quality was shared with so few. . . a sensation . . at so many premier courses that hosted less than a dozen rounds a day.”

Early on he finds an antidote at Shennecossett, a Donald Ross-designed muni in the New York suburb of Groton, CT., where by the magic of social media he assembles a half-dozen young public course golf wonks, leading him to reminisce about learning to play golf from his father, who as a young working-class Irish enlisted man from Scranton PA. had in the early ‘50s acquired the golf habit at a 9-hole Navy base course in San Diego.

Coyne is an artist and storyteller, who then proceeds from east to west exploring the complex personality of American golf at private and public courses, famous and little-known, in all 50 states and the Navajo Nation (where he plays Rez Golf at Lonesome Pine, a literal dirt track on a bluff outside of Flagstaff, AZ.), winding-up in California and finally Hawaii.

The Professor showed up at Sharp Park one rainy weekday afternoon in the first week of December 2019 to play with a course historian and architect Jay Blasi, one of the architectural forces (with his fellow-Upper-Midwesterner Tom Doak)  supporting the San Francisco Public Golf Alliance’s Save Sharp Park efforts.  Coyne identifies Sharp Park as “MacKenzie’s only other seaside course after Cypress,” and continues:

“The map said Sharp Park would be near the ocean, but I didn’t believe a muni would ever be set so close to the waves; it was, and those waves had reclaimed a handful of MacKenzie’s holes. Twelve of his originals remained . . . As a city course, Sharp Park had no equal when it came to location and holding on to those acres had proved an arduous task—an eight-year legal battle saved the grounds from being closed off as habitat for a garter snake and a rare frog, yet another example of conservationists failing to embrace golf ’s protective capacities.

“It was a subject Scotsman David McLay Kidd had stamped into my psyche: Lay out some golf holes and fragile terrain is instantly preserved and protected, because it now has purpose, both commercially and recreationally. Leave those lands to the whims of absent government agencies or to the wishful benevolence of neighbors and dunes quickly became cut-throughs to the beach or spots for bonfires and keggers. Done right, golf development could be a great green shield for protecting those rare spaces, with course superintendents serving as caretakers who were more efficient and knowledgeable than overstretched municipal agencies. Jay Blasi explained that . . . conservationists . . . didn’t understand that a course thrived only when its setting thrived, and that a conscientious golf architect was really offering to do the environmentalists’ work for them.”

The day after Sharp Park, Coyne is at the Olympic Club’s 9-hole Cliffs Course for a 100-hole Youth on Course fundraiser.  Halfway through that marathon he meets Lynda, a 60-something member of Sistas on the Links, an African-American women’s golfing society. Lynda is a golf-loving retired businesswoman and PhD, who a few years before had returned to school at Napa Valley Junior College with three of her girlfriends to support a Little Sista who needed a junior college golf team to pursue her university golf dream. That Napa Valley team went to the State Championship, Lynda made the All-League Team, and the Little Sista went on to play university golf.

A sampler of other Coyne commentary from his Northern California swing:

“You know you’ve played a lot of courses when you’re at the home of five US Opens and the primary attraction in your golf-weary mind is a tube of ground beef,”  Coyne says by way of introduction to the halfway house beside the 10th green.  “Back in the 1950’s, Hot Dog Bill’s had decided they could save on buns if their burgers fit into hot dog rolls when they set up shop next to Olympic.  They were soon invited to move their food stand onto the Lake Course, where Brendan and I got the last burgerdogs of the day and discovered they were a savory blend of fat, spices, and fried onions.”

“ . . . a busy day at Cypress was forty golfers, and with a small membership of mostly nonlocals, the empty fairways and silent clubhouse were a reminder of our good fortune. . .  The holes were challenging but not I’ll-just-drop-one-here hard. . .  When it came to variety of holes and shots, Cypress had no peer, and the fact that it was all so damn beautiful – we went into the day knowing it could never match our expectations.  We were right because our expectations had not been grand enough.”

“. . .  it wasn’t cheap at $295, but it felt reasonable for the chance to play MacKenzie’s greatest daily fee course and the one he considered his favorite design, . . .  Pasatiempo gave you your greens-fee’s worth on every shot, from barrancas to ravines to audaciously shaped bunkers by the former camouflage artist . . .  Mackenzie used every idiosyncrasy the land gave him and molded them into golf shots you’d never quite considered before.”

If you want more of Coyne’s insights and stories – including Tom Doak’s amazing reversible 18-fairway/36-hole The Loop at an earstwhile Detroit Mob resort in Upper Michigan, the game-changing influence of Mike Keiser’s Bandon Dunes Resort, a sociological history of America’s exclusive private country club model, to name a few – you can find A Course Called America on Amazon.

Also, coming soon to bookstore near you, check out Tom Doak's latest Must Have addition to your golf library... 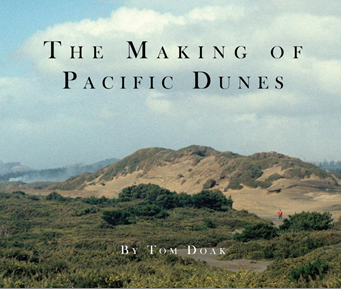 In this book Tom Doak, one of the 21st Century golf’s premier golf architects, tells the story of the design and construction of his most famous course, Pacific Dunes, at Oregon’s Bandon Dunes Resort.  Among other things, Doak is an architect, critic, author, MacKenzie expert, and a consulting architectfor the renovation of Sharp Park.  This new volume, with a mid-June publication date, contains Doak's journal entries, sketches of greens, and memos from his client, Mike Keiser, combined with stunning photography [before and after] to supplement his recollections of how the course was built, and what it's meant in the twenty years since it opened.  At a pre-publication order price of $40, The Making of Pacific Dunes is available from Doak’s Renaissance Golf Publishing.