First, apologies to Boz Scaggs. Our "Lido Shuffle" has nothing to do with his 1977 hit song.

Our Lido Shuffle starts in Long Island then shuffles off to England, Scotland, back to the US and in particular Northern California, on to Georgia, South America, Australia, Canada, takes a detour through cyberspace and most recently and improbably lands in Wisconsin. Along the way we are joined by fellow travelers C.B. Macdonald, Horace Hutchinson, Bernard Darwin, Alister MacKenzie, Roger Winthrop, Seth Raynor, John McLaren, Jack Fleming, Ray Haddock, Peter Flory, Michael Keiser, Tom Doaks, Jay Blasi, and our own San Francisco Public Golf Alliance co-founder - Bo Links.

Our Lido Shuffle does not start with a song. It starts with a contest.

On August 1st,1914, in a column entitled "On The Green" bylined by Horace Hutchinson and Bernard Darwin, Britain's Country Life magazine published the winner of a "golfing architecture" contest to design an ideal "two-shot hole". The contest was sponsored financially by the dean of American golf architects - Charles Blair Macdonald. The winner was Dr. Alister MacKenzie, a golf architect of some reknown in Great Britain, but a relative unknown in the United States. 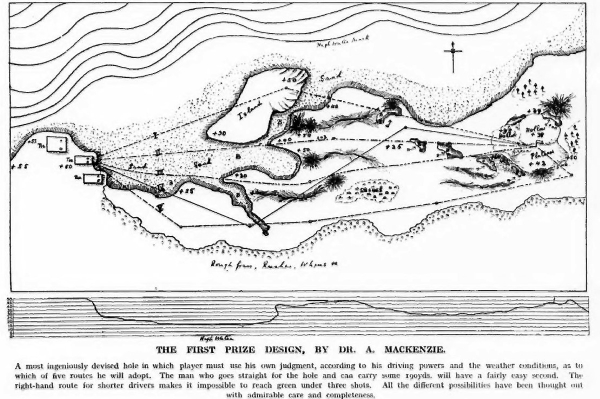 "An effort has been made in designing this hole to produce the old type of golf in which a player has no fixed line to the hole, but has to use his own judgment in playing it according to varying conditions of wind, etc. In this respect it is somewhat similar to the long hole coming in at St. Andrews. The green is guarded by bunkers and a large hillock (15 to 20 feet high) on the right side of the approach, and is tilted up from the front to the back and from left to right, so that the approach from the left is an easy one and from the right necessitates such a difficult pitch that the player is likely to overrun the green into the bunker beyond."

MacKenzie's ideal two-shot hole was realized at the Lido Golf Course when it opened for play in 1917. The course construction was financed by stockbroker Roger Winthrop, who gave C.B. Macdonald and his protoge Seth Raynar a blank check and a mission to build one of the greatest courses in America on 115 acres of Long Island marshland. It proved to be the most expensive course ever built at that time.  Macdonald utilized several of the submissions to the contest he sponsored, including the winning design by Alister MacKenzie which became the finishing 18th "Home" hole.  Golf writers and players deemed the cost worth it. Writer Bernard Darwin called it "the finest course in the world." In 1921 Walter Hagen assessed the Lido as "the greatest test in the world, with possible exception of Pine Valley .… The home hole was built after the design of the best of more than one hundred plans submitted in a prize contest conducted in England for the best two-shot stretch." 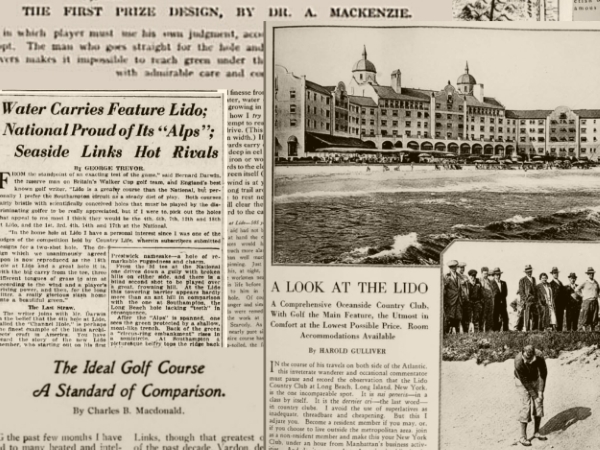 The Country Life contest and Lido Golf Club launched Alister Mackenzie's reputation and career in the United States and worldwide. In 1926 he moved to the United States. He was excited about the US being fertile ground for new golf courses and intending to leverage his new found fame at the finishing hole of the "finest course in the world". From 1926 until his death in 1934, MacKenzie was involved in the design and construction of 38 golf courses in the United States, England, Australia, Scotland, Ireland, Argentina, Uraguay, New Zealand, Mexico, and Canada. Of the 14 course in the US, 11 are in California, of which 8 are in the greater San Francisco Bay area. Among his notable courses worldwide - Augusta National, Cypress Point, Royal Melbourne, Royal Adelaide, Pasatiempo, The Old Course at Lahinch, Cork Golf Club, and Sharp Park in Pacifica.

During this period of prodigous productivity the City of San Francisco approached Alister MacKenzie to design a golf course on 400 acres of land in Pacifica that was bequethed to the City by George and Honora Sharp. In 1929 the City contracted with Alister MacKenzie and Robert Hunter's firm - The American Golf Course Construction Company. MacKenzie's routing for Sharp was published later that year. Construction started in 1930 and was completed in April 1932. And in that routing were two holes based on the design of the "ideal two-shot hole." 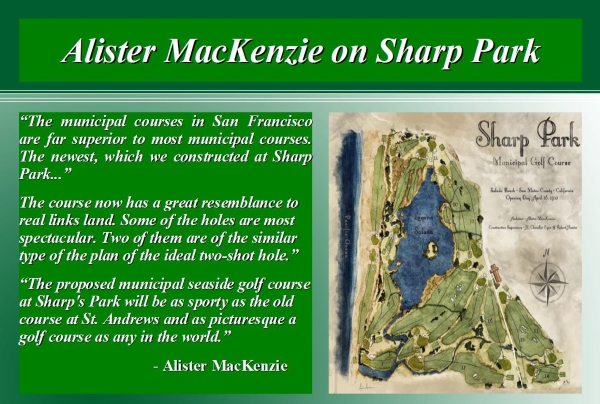 Both of the "spectacular... ideal two-shot holes" at Sharp Park can still be played today, although the original "island" route has been reclaimed by a failure to control invasive plant growth in Laguna Salada. Here Jack Fleming's contemporaneous review of the original 5th...

"A lakeside hole and one of the most interesting holes on the course, similar to Dr. MacKenzie’s “ideal golf hole”. Three tees, four routes. Easy route probably will cost at least one extra stroke to get on while the other combinations of tees and routes give rewards proportionate to their respective risks."

"One of the best holes, two tees, four possible routes, sand and water carries optional. The ideal shot is an accurately placed ball on an island with a water carry on both first and second shots. If well placed on first, the green opens well for a pitch and run second. All other approaches to the green are guarded."

And an artist's conception of the original MacKenzie routing: 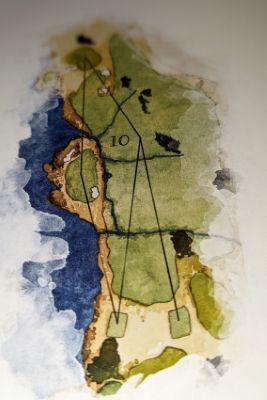 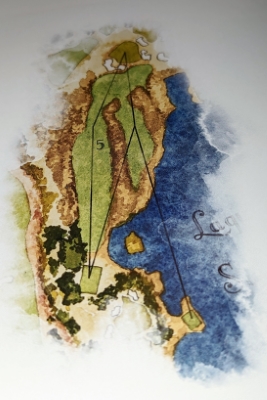 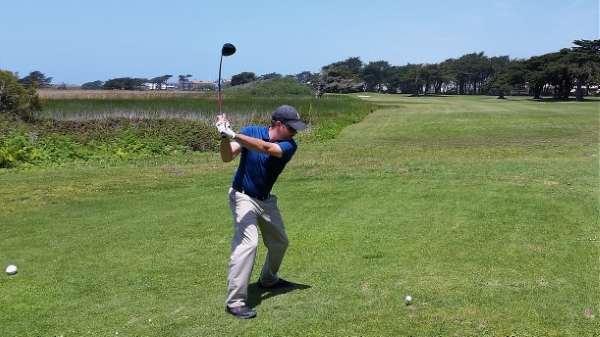 The 14th (original 10th) tee at Sharp with a classic MacKenzie camoflauged green in the distance.

"Those plans hit the skids with the onset of World War I and the original investors had lost interest by the Great War’s conclusion. The next buyer was William Reynolds, a former senator who began the area’s real estate boom and built a hotel, putting the retitled Lido Beach Golf Club on the map for the wider population. At its peak, the club featured more than 1,000 members. Unfortunately, that peak ended with Reynolds’s death; between his family and other investors, the “all-engulfing rough” soon received less care. Even at its critical peak, Macdonald was disappointed in the upkeep... The U.S. Navy assumed control of the property during the next World War and it never returned."

Which brings us to...

Here the story of the the "ideal two-shot hole" takes an interesting twist. Some 80 years after the Navy commandeered and destroyed the Long Island Lido, the course rose from the dead. Well, virtually at least.  The image at the top of this post is a screenshot of a 3-D rendering of the 18th "Home" hole at the Lido course - the very hole that C.B. Macdonald built on the principles Alister MacKenzie outlined with his winning entry. Thanks to the work of golf historian and digital course hobbyist Peter Flory, you can virtually fly the hole (as well as all of the Lido holes) at this link. He relates how this, and more, came about in this "Golf Course Architecture" interview:

"As my skills grew, I eventually started to apply the technology to revive lost golf courses, experience them and understand them in a way that no living person could. I then started to get involved with some real course restoration projects on the side. So, while I never expected a course like the Lido to become a reality, I was already getting used to the idea of integrating digital renderings into actual projects."

As Flory explains, the story takes an amazing turn when he is approached by Mike Keiser and Tom Doak to help them rebuild a faithful reproduction of the Lido Course, in real life, at Sand Valley in Wisconsin. Erik Anders Lang at Skratch tells the story in this youtube video: "The Holy Grail of Lost Courses is Back".

The video is well worth 30 minutes of your time. But we're not done yet. Peter Flory is working with the San Francisco Public Golf Alliance and Jay Blasi to render Sharp Park as it could be someday. Stay tuned.

"MacKenzie’s great-grandson, Ray Haddock, headed original funding for the Prize. Dr. MacKenzie left behind a manuscript entitled The Spirit of Saint Andrews, whereupon Mr. Haddock had it published and proceeds from the sale were used to create a perpetual fund for the Lido competition. The competition began in 1998 and the success of the Prize is evidenced by winners who have gone on to become successful golf course architects. All of the winners and finalists have exhibited the ability to incorporate MacKenzie design features into their entries."

Our San Francisco Public Golf Alliance co-founder, Bo Links, is an accomplished lawyer who has argued and won before the Supreme Court, an author and poet (books “Into the Wind”, “Riverbank Tweed and Roadmap Jenkins”, "Golf Poems - The Greatest Game in Rhythm and Rhyme"), a painter and golf historian. But we suspect that he considers his proudest accomplishment is being a four time winner of the Ray Haddock Lido Prize, including last year and again in 2022. Frankly, we don't know why they don't rename this competition the "Links Prize".

This year's winning entry "Throttle" is a two-shot hole that channels Alister Mackenzie and all of his design principles. For the benefit of future competitors, we asked Bo what it takes to win. Excerpts from his essay: 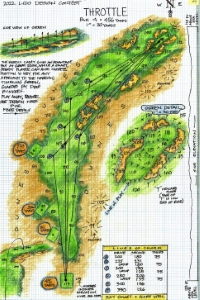 "Like many others, I have attempted to distill the magic of MacKenzie’s architecture.  At bottom, a MacKenzie course or hole is fun, exciting and exhilarating for everyone...

Of course, there are a lot of subtleties that underlie the concepts of fun, excitement and exhilaration.  The main issue always relates the wide spectrum of golfers out there.  Thus, the question:  how do you make a hole exciting for players of different abilities?  One key is to create different hazards or challenges that affect different players differently.  The hole I designed this year illustrates the point.  Called “Throttle,” the hole tempts a long player to make a heroic carry (one of MacKenzie’s favorite terms, by the way), in order to gain an advantage.  But….after clearing the trouble, that player faces a shot  to a narrow, angled and undulating green.  In short, it’s not an “easy four” for the long hitter.

Now let’s have an average player traverse the same hole.  That player will lay up short of the trouble, hit a medium shot over it, and then likely be left with a short pitch for a makeable par putt.

The net result:  A challenge for the long hitter, while the short hitter also gets plenty of challenge, coupled with the excitement and thrill that his/her game can match up against a bomber.  Together on the tee, they can each hit their shots, go their separate ways, but the winner will not be decided until they meet up with each other on an undulating putting green.  It doesn’t get any better than that, in my opinion."

And on that note we'll wrap with Boz Scaggs and the Lido Shuffle: