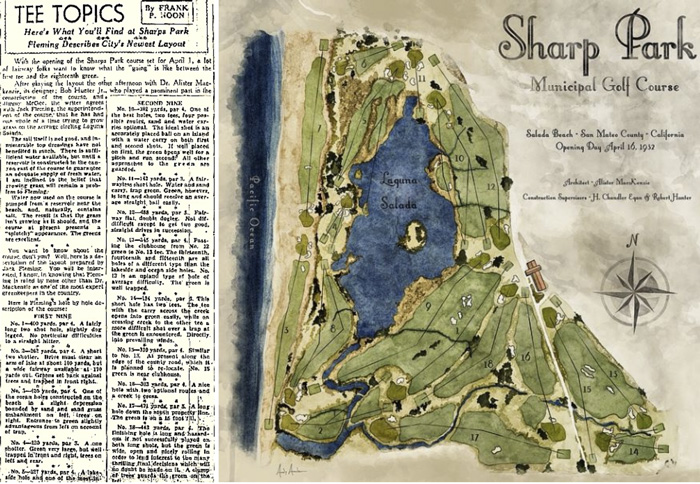 The San Francisco Call Bulletin on 02/29/1932 and the original Alister MacKenzie routing on opening day.

With the opening of the Sharps Park course set for April 1, a lot of fairway folks want to know what the "going" is like between the first tee, and the eighteenth green.

After playing the layout the other afternoon with Dr. Alister MacKenzie, its designer; Bob Hunter Jr., who played a prominent part in the construction of the course, and Jimmy McGee, the writer agrees with Jack Fleming, the superintendent of the course, that he has had one whale of a time trying grow grass on the acreage circling Laguna Salada. The soil itself is not good and innumerable top dressings have not benefited it much. There is sufficient water available, but until a reservoir is constructed in the canyon east of the course to guarantee an adequate supply of fresh water, I am inclined to the belief that growing grass will remain a problem to Fleming.

Water now used on the course is pumped from a reservoir near the beach and, naturally, contains salt. The result is that the grass isn't growing as it should, and the course at present presents a "splotchy" appearance. The greens are excellent.

You want to know about the course, don't you? Well, here is a description of the layout prepared by Jack Fleming. You will be interested, I know, in knowing that Fleming is rated by none other than Dr. MacKenzie as one of the most expert greenkeepers in the country.

Here is Fleming's hole by hole description of the course: 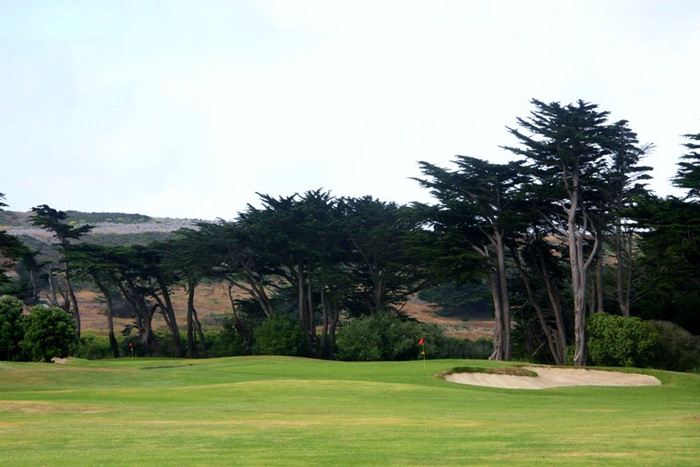 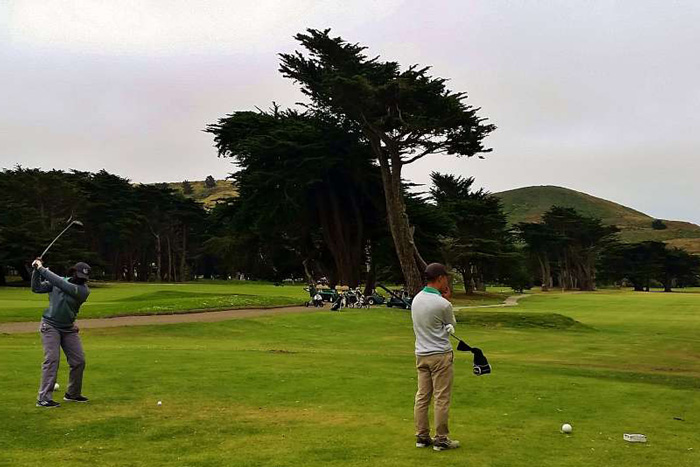 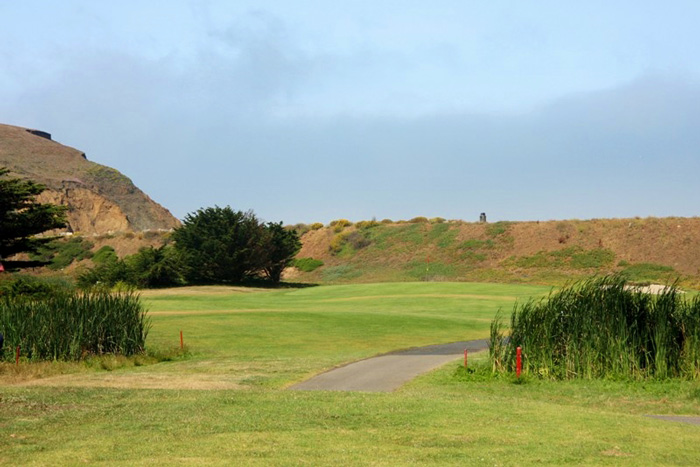 The 2nd hole originally was a short par 4 with double tees and a routing that crossed a corner of the lagoon.

Today it's the 12th, a stout three par, backed against the sea wall with ocean breezes always in play.

"A short two shotter. Drive must clear an arm of lake at about 100 yards, but a wide fairway available at 175 yards out. Green set back against trees and trapped in right front." - Jack Fleming

"One of the ocean holes constructed on the beach in a slight depression bounded by sand and sand grass embankment on left, trees on right. Entrance to green slightly advantageous from left on account of traps." - Jack Fleming 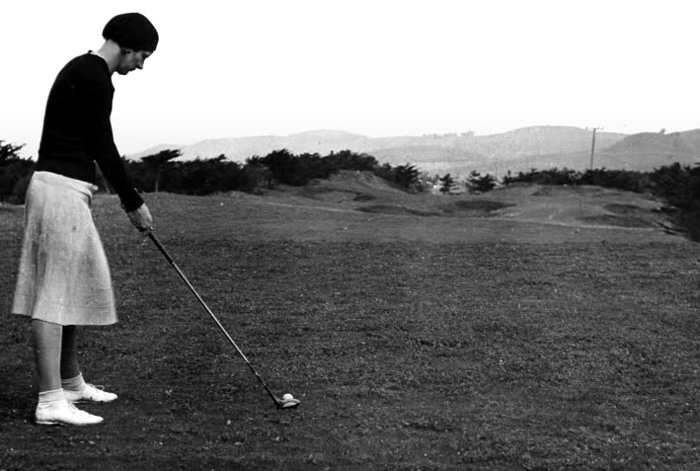 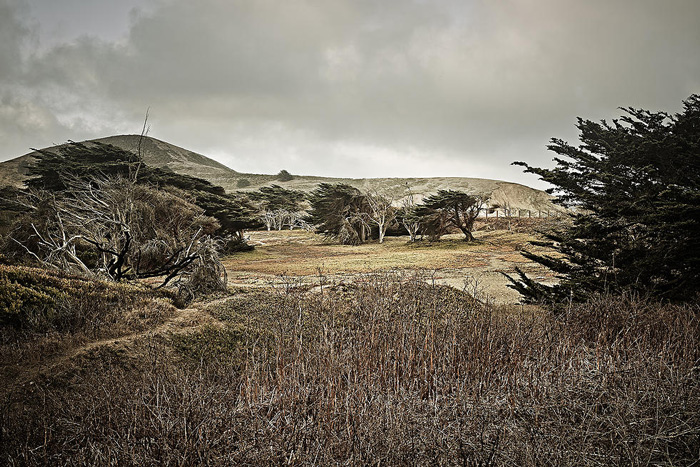 The original 4th hole is waiting to be reclaimed.

Artists recreation of the original 4th

"A one shotter. Green very large, but well trapped in front and right, trees left and rear." - Jack Fleming 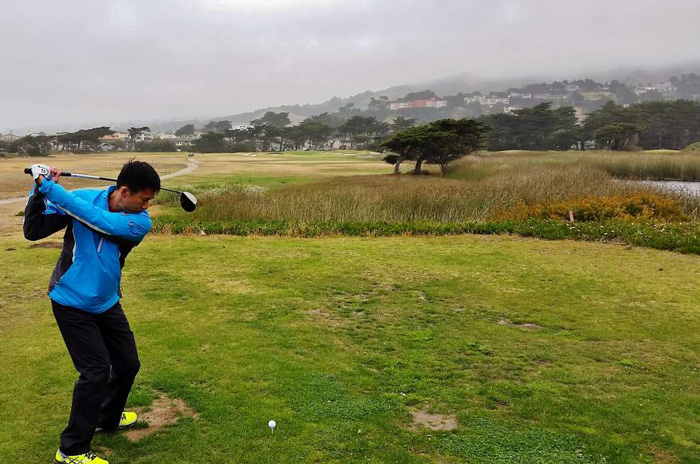 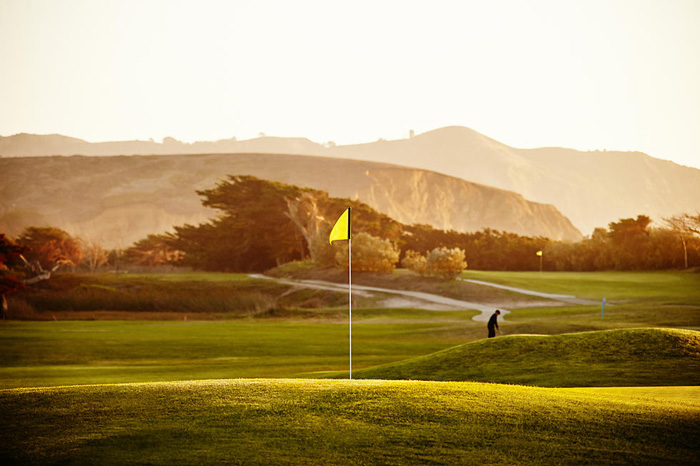 This hole was one of two that MacKenzie modeled after the famous "Lido Hole“, the 1914 design entry submitted to Country Life magazine that launched his career.

"A lakeside hole and one of the most interesting holes on the course, similar to Dr. MacKenzie’s “ideal golf hole” [a reference to the Lido Design]. Three tees, four routes. Easy route probably will cost at least one extra stroke to get on while the other combinations of tees and routes give rewards proportionate to their respective risks." - Jack Fleming 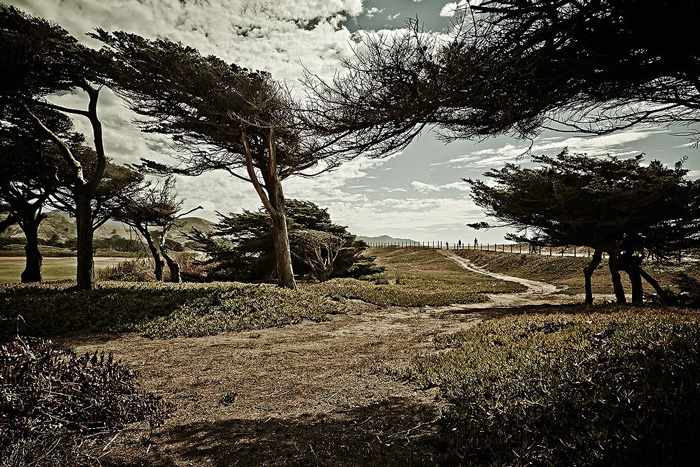 "Similar to No. 3, but in opposite direction. A trap endangers the short player on his second, but properly played as a two shot hole a par is possible." - Jack Fleming

"A dogleg, quite difficult for two shots. Drive is blind and over trees if played close to get in opening for a good second. Plenty of fairway, however, for those who play short and do not care to risk trees on right for possible par. The wide play practically requires three strokes to get on." - Jack Fleming 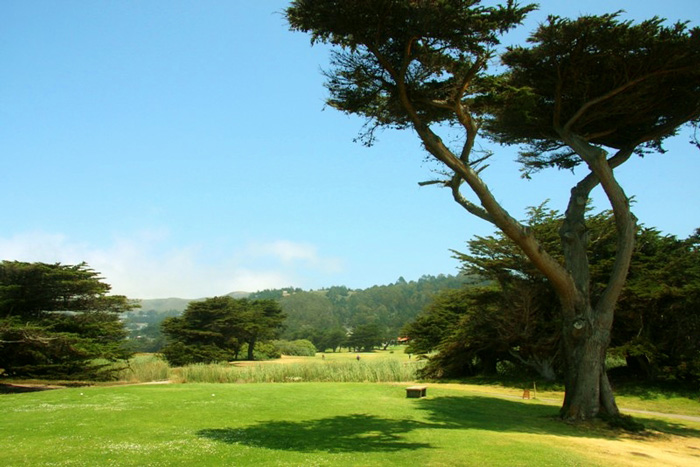 The modern day 13th as viewed from behind the old 9th tee.

"A lakeside hole with wide, sandy beach on water side. Back tee should be used by all, as water carry is very short and close to tee. Requires three good shots to get on if dogleg is played, but possibly a very long sure approach will get in under par." - Jack Fleming 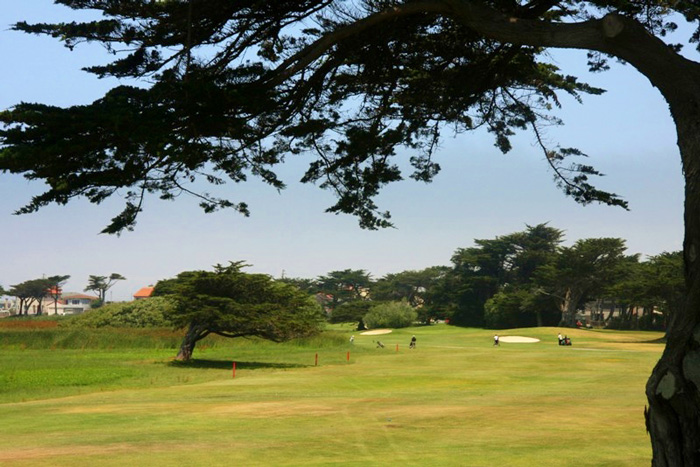 This is the other hole MacKenzie modeled after his Lido Hole. The original design, like that of the original 5th hole, featured two fairways. The one on the left, closest to the lagoon, was a peninsula much like the Lido design. A mound and camouflage bunker protect the green.

"One of the best holes, two tees, four possible routes, sand and water carries optional. The ideal shot is an accurately placed ball on an island with a water carry on both first and second shots. If well placed on first, the green opens well for a pitch and run second. All other approaches to the green are guarded." - Jack Fleming 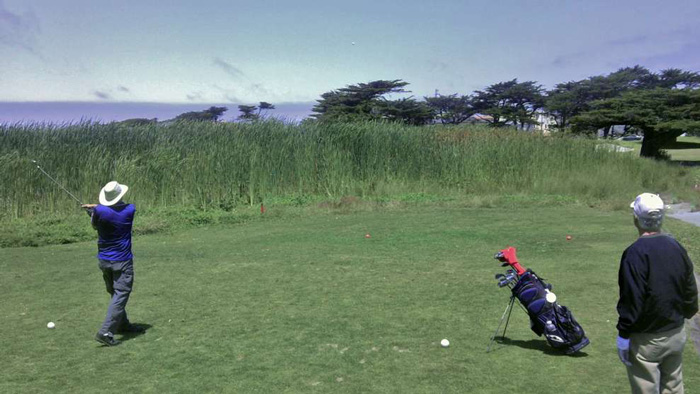 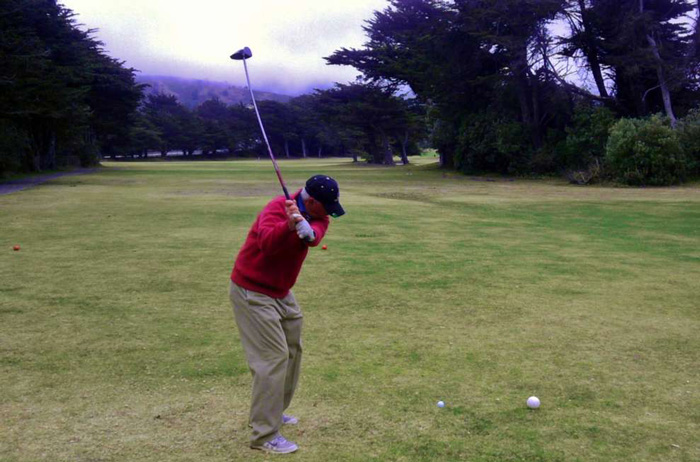 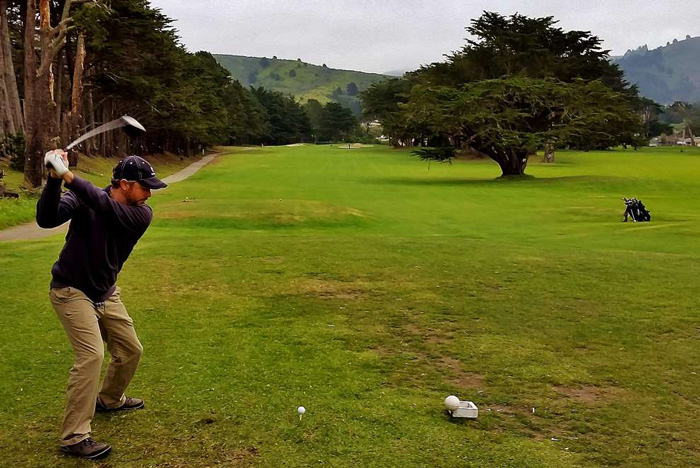 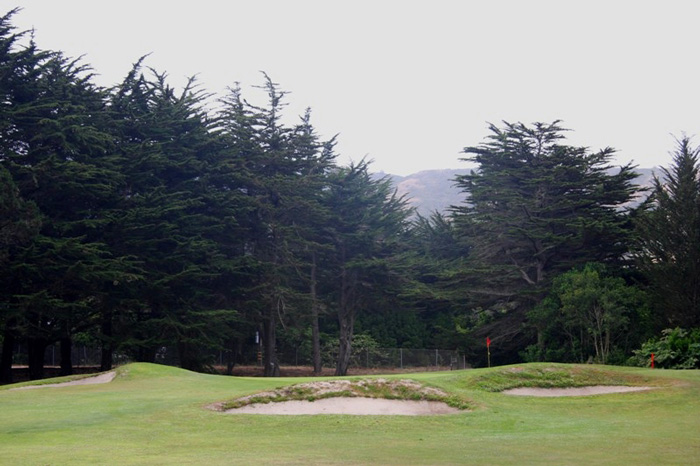 This sporty par 4 was originally the 13th hole. The green is well protected and one can readily see how MacKenzie's original green must have heaved and flowed with the bumps and hollows that are there today.

"Passing the clubhouse from No. 12 green to No. 13 tee. The thirteenth, fourteenth and fifteenth are all holes of a different type than the lakeside and ocean holes. No 13 is an upland type of hole of average difficulty. The green is well trapped." - Jack Fleming 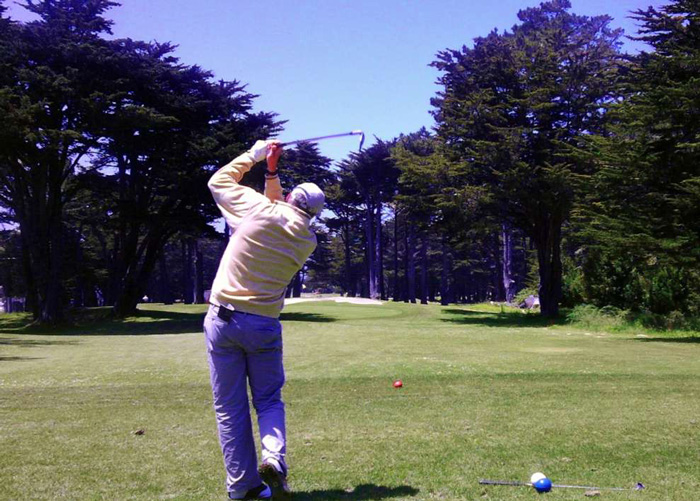 "This short hole has two tees. The tee with the carry across the creek opens into green easily, while on crossing creek to the other tee a more difficult shot over a trap at the green is encountered. Directly into prevailing winds." - Jack Fleming 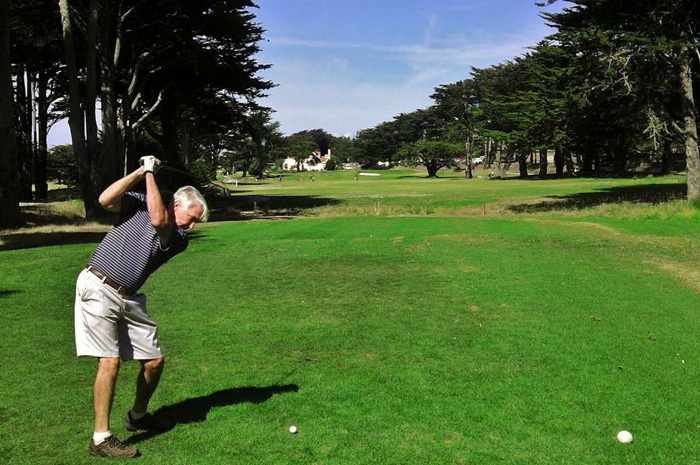 "Similar to No. 12. At present along the edge of the county road, which it is planned to re-locate. No. 15 green is near clubhouse." - Jack Fleming 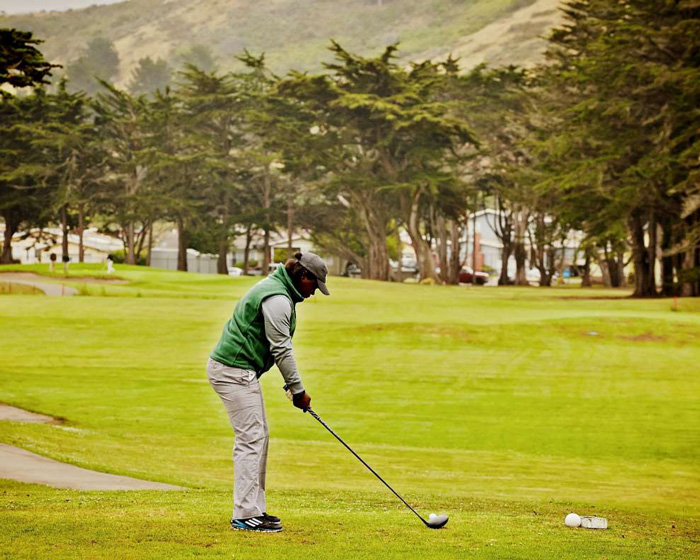 "A nice hole with two optional routes and a creek to cross." - Jack Fleming 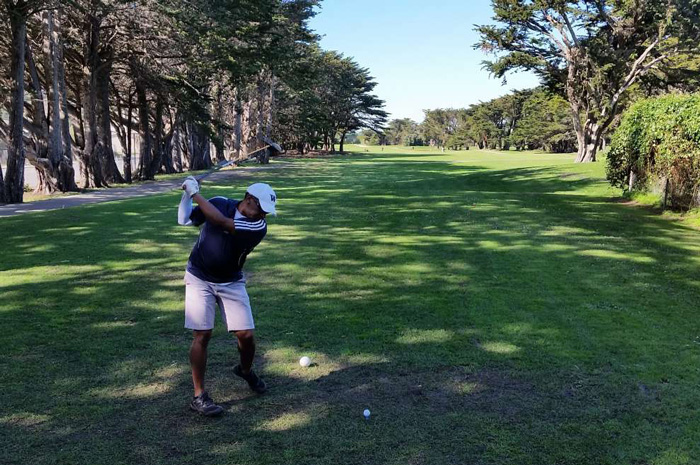 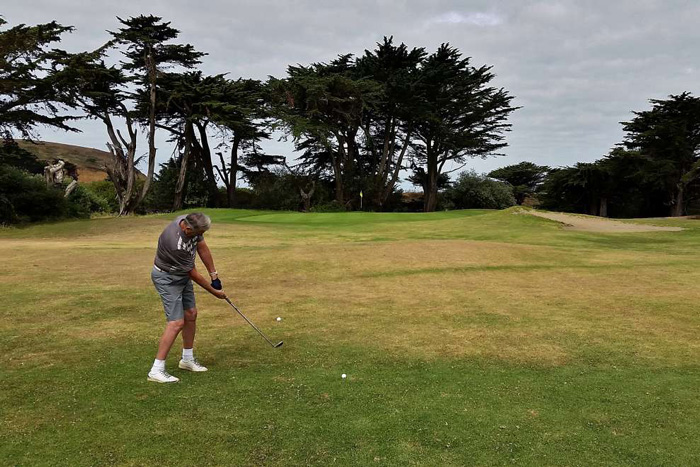 "A long hole down the south property line. The green is on a 15 foot fill." - Jack Fleming 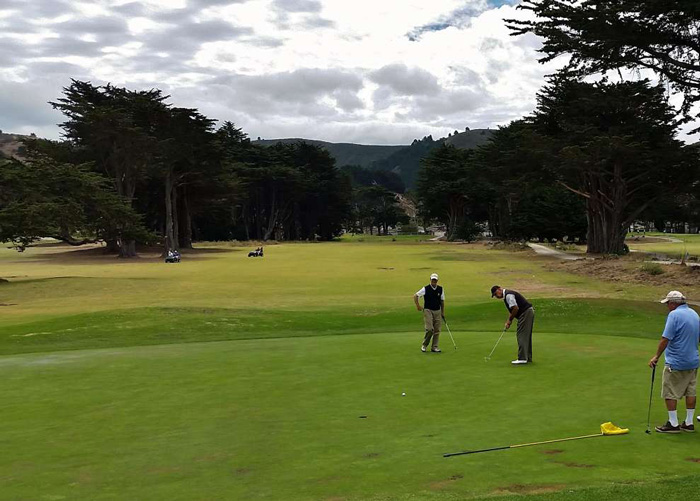 "The finishing hole is long and hazardous if not successfully played on both long shots, but the green is wide, open and nicely rolling in order to lend interest to the many thrilling final decisions which will no doubt be made on it. A clump of trees guards the green on the left." - Jack Fleming